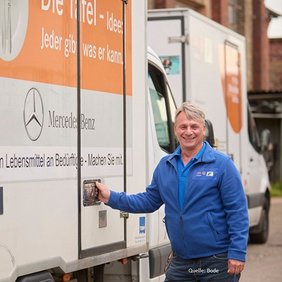 Offenburg, Germany - Wolfgang Hesse, in charge of training at HOBART, is doing well – and for that he is truly grateful. After surviving two strokes, he has found the local food bank as the place where he can give something back.

There sure is a lot going on here on this Friday in the courtyard of the Offenburg food bank at the lower Mühlbach river. Lots of back and forth, plenty of people, cars, boxes and trolleys. It's routine for most of the people here – demonstrated by the way they walk around. Wolfgang Hesse stands quietly at the sidelines for a moment. He has already unloaded the first vegetable delivery. He usually drives on Saturdays, fetching food twice a month between 8 a.m. and 1 p.m. from the contact points for the Kinzigtal area tour. He welcomes us with a smile.

The 58-year-old is in charge of training and has been with HOBART in Offenburg since 1989. “Back then, my motivation was also to offer help,” jokes the Stuttgart native, "Development aid in Baden.” In reality, the business administration graduate joined HOBART after completing his studies as an assistant to the management. The training activities, which were later to become his task, did not exist back then.

Training for sales representatives became necessary with the changeover from direct sales to retail distribution. Hesse’s job is to establish specialist dealers as a sales channel. He was able to achieve this, and soon Hesse took over the training himself. Training sessions have been held with participants from all over Germany, Austria and Switzerland, with more than 3,000 participants in online training sessions last year and up to 400 participants at training events and shows before the pandemic. Hesse says, “Seminars always mean an exchange between people.” And he is pleased that this is now possible both online and offline again. “I like working with people.”

With people, for people
This is a something the volunteer driver enjoys in his work. On his tour are petrol stations, food discounters, supermarkets and bakers in Offenburg, Berghaupten, Gengenbach and Haslach. "Very possible," he says, acknowledging that his communication skills are helpful for his work. He already knows the store employees personally and is looking forward to chatting with them.

However, the motivation behind his commitment is something else: “I want to give something back to society,” says Hesse.  He feels a great deal of gratitude. Hesse had suffered two strokes and survived both due to surgery. “I received a lot of encouragement during that time.” At the beginning of 2019, not six months after the second stroke, he sat behind the wheel for the food bank. And his assistance is welcomed. “1,350 families depend on the discounted food from the food bank in Offenburg,” says Wolfhart von Zabiensky, its chairman, who is delighted with any help the food bank can get. Just like Wolfgang Hesse, he is pleased that he can be of service here.