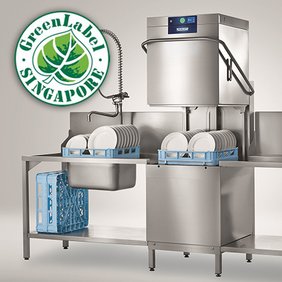 Offenburg – Low consumption without any compromise in terms of power: Dishwasher manufacturer HOBART further optimised their hood-type dishwashers, which were launched at the beginning of this year. The AMX model of the PROFI series now received the SINGAPORE GREEN LABEL award for environmental compatibility. The award is given by the "Singapore Environment Council", a nonprofit organisation which draws attention to products with a particularly low impact on the environment.

With a fresh water consumption of only 2.0 litres per rack, the HOBART hood-type dishwasher AMX is one of the most economic dishwashers in the market. It has various other features making it particularly "green", such as the standard exhaust energy storage which significantly reduces energy consumption. Thanks to the all-round sealed hood, the hot waste steam remains in the system and is not released to the room. As a result, the stored heat energy can be used again. Possible savings of up to 3,120 kWh per year can be achieved, as well as a noticeable improvement of the climate in the wash up area.