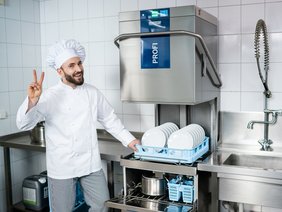 Offenburg, Germany – Intelligent and powerful washing on two levels: HOBART, the commercial warewashing specialist, recently won gold in the Warewashing category of the COOKING AWARD 2020 for its first-in-the-world innovation, the TWO-LEVEL-WASHER. The award is presented annually by the trade magazine COOKING + CATERING INSIDE, which distinguishes 24 different groups with a bronze, silver, and gold award.

Professional chefs all over Germany voted for their favourites among the convenience products and kitchen equipment launched in the previous year. Repeating its distinction from 2019, HOBART was once again among the top providers of warewashing technology – this time for the TWO-LEVEL-WASHER, which has been on the market since the middle of last year.

Two in one: the first TWO-LEVEL-WASHER in the world
With the TWO-LEVEL-WASHER, HOBART introduced the first commercial dishwasher to the market with a second wash chamber for simultaneous washing. Whether for plates, coffee cups or gastronorm pans, the HOBART TWO-LEVEL-WASHER not only increases the holding capacity but also the flexibility in terms of different types of dishes. By increasing the capacity per wash cycle, HOBART is sure to significantly relieve the dishwashing staff's workload. This dish and utensil washer is not only extremely efficient, but it also has a very small footprint, making it equally suitable for smaller kitchens. Despite the second washing level, the TLW does not take up any more space than a conventional dishwasher, thanks to its compact design. Easy-to-clean stainless steel surfaces also make routine dishwasher tasks easier. Another time-saving feature is the USB interface which greatly simplifies data transfers for HACCP documentation in line with DIN SPEC 10534 for operating logbooks.