1897 - FOUNDING
Engineer Charles Hobart founded our company in Troy, Ohio in 1897. In fact, he was a student of the famous physicist Thomas Edison. In its early years, his company manufactured generators, dynamos, electric motors and even carriage roofs.

1903 - FIRST ELECTRIC COFFEE GRINDER
Switching from manual to electric operation: the first electric coffee grinder was invented by HOBART and made life much easier for coffee houses and restaurants. The machine meant that staff were no longer required to do the tiring work of grinding coffee.

1926 - THE FIRST HOBART DISHWASHER
The year 1926 saw HOBART's acquisition of the Crescent company and the launch of the first HOBART brand dishwasher.

1930 - FOUNDATION IN HAMBURG
In pre-war Germany, there was great demand for HOBART preparation technology. In 1930, HOBART Maschinen Gesellschaft mbH was founded in Hamburg with the aim of better developing the market. 1960 - START OF PRODUCTION IN OFFENBURG
1960 was a significant year for HOBART, namely thanks to the acquisition of the dishwasher department of the K. Martin company in Offenburg - 24 employees and 54 workers were integrated into the company. This was then supplemented by 20 more employees from Hamburg, bringing the HOBART team up to 98 people at the beginning of the 1960s. That's when things really started to take off!

1969 - ARRIVAL OF THE GTP
At the end of the 1960s, the product range was expanded with a key new product: the GTP dry steam fast cooker. Praised as a “modern and highly promising cooking process”, the GTP paved the way for HOBART's cooking technology division. The GTP was initially manufactured in the USA, and then by Germany in 1978.

1980 - NEW ELGERSWEIER FACTORY
HOBART continued to grow and the Holderstock site eventually became too small, forcing management to look for a new location - Elgersweier. The construction project was completed in 1980. There was now 12,000 square metres of space for production and 1,000 square metres for administration. However, it was only in 2004 that the entire administration moved from the Holderstock site to Elgersweier.

TRADE PARTNERSHIP
At the end of the 1980s, HOBART's strengths were in traditional hospitality and hotel business, which accounted for over 33 % of the total order volume; industrial canteens made up over 14 %, and hospitals more than 11 %. Shipyards and airlines were also becoming an increasing part of HOBART's clientele. Yet the most important customers were, and still are, specialist dealers, who typically sell to the hospitality industry. Similar to planners and architects for large-scale projects. HOBART recognised this very early on and developed its network.

1997 - CELEBRATING 100 YEARS
1997 marked the 100th anniversary of the company. Just like when the company was founded, innovations are still a key factor in its success and put HOBART at the forefront of the market.

1999 - INTEGRATION INTO THE ITW GROUP
In 1999, HOBART was incorporated into the ITW Group, joining other premium brands in the Food Equipment Group. As a result, the 80/20 model and the ITW Group philosophy “Understand - Simplify - Focus - Renew” were introduced and customer benefit was made the top priority.

2007 - NEW ERA: PREMAX
In 2007, HOBART's PREMAX line began a new chapter in the annals of warewashing technology. Over 100 patents were submitted in connection with this. The series was designed to cut water consumption by up to 50 %, energy consumption by 30 % and chemical consumption by 80 %. The PREMAX also introduced the newly developed wide-angle nozzle, which was then gradually incorporated into all HOBART dishwashers in the years that followed. 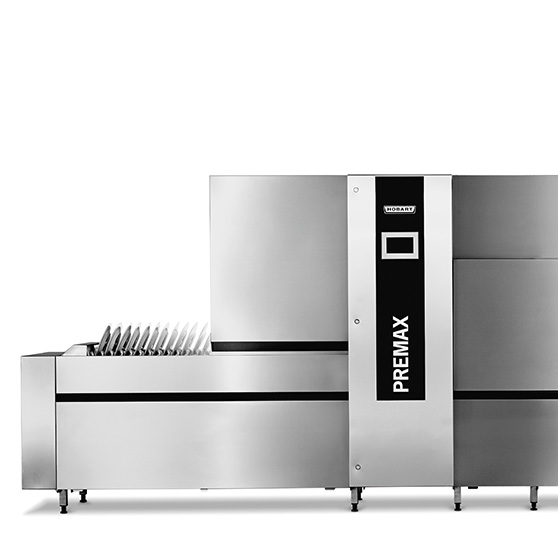 2011 - INTERNATIONAL RESEARCH AND DEVELOPMENT CENTRE IS BUILT
The construction of the international research and development centre at the Offenburg site was another milestone in the company's story. This is where new ideas are turned into real innovations to make warewashing technology more efficient, cost-effective, energy-efficient and even more user-friendly. To date, this location has resulted in more than 520 patent applications.

2018 - NEW UNDERCOUNTER DISHWASHERS WITH TOP-DRY DRYING
HOBART has once again set the benchmark with its new generation of undercounter dishwashers. Thanks to the unique TOP-DRY drying, customers no longer have to polish glasses, saving valuable time.

2019 - 19TH RECORD YEAR IN A ROW
2019 was a very special year – ahead of the Corona crisis, HOBART marked its 19th record year in a row! This exceptional achievement was made possible by the high level of commitment of the entire HOBART team, consistent investment in research and development, and close interaction with customers.

2021 - FURTHER FACTORY EXTENSION
In 2018, HOBART began what was successfully completed in 2021: The production site in Elgersweier was extended by a further 13,000 m2. The f irst machines rolled off the production line there as early as the summer of 2020. Other production lines were then subsequently restructured and a photovoltaic system was installed on the roof to supply the entire production with solar power.