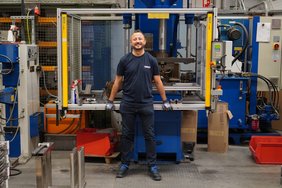 Like Eminem in the movie 8 Mile: Sometimes P-Vers gets the inspiration for new songs while working

At HOBART, we know him as Patrick - for all Offenburg citizens, he is "P-Vers". As a rapper, construction mechanic Patrick Bierhinkel is as hungry for success as ever. "P-Vers" is cool with us calling him Patrick. For him, the rapper is no different from the amiable colleague from the wash arm production. We meet him at a local school "Georg-Monsch-Werkrealschule" in Offenburg. "This is where it all started," says the man with the wine-red cap, his eyes shining. "A quarter of a century ago."

At 41 years of age, Patrick is a construction mechanic with HOBART and works in the wash arm production. This is where he started as an apprentice in the mid-1990s. After completing a second training as a media designer, he returned in 2006 after learning from his former instructor on the phone about a vacancy for a journey-level position in his old job.

Ten years before, Patrick "P-Vers" Bierhinkel's second career had started at this very place, the Georg-Monsch-Schule. Under the canopy of the Technical Town Hall, Patrick's buddies Claudio and the guys had been doing break dance –  nothing unusual about that, Patrick reminiscences: "20 to 30 of us used to be in this place at any time." But on that day, a microphone was plugged in the boombox, and Patrick became P-Vers: "An instrumental was on, and I started freestyling. This was the first time I rapped in public." This was in 1994. The studio album "Illmatic" by his idol Nas had just been released, and the new blood from Offenburg, born in the year the first hip hop single was launched (Sugarhill Gang – Rapper’s Delight), had just turned 15. Before that day, he had only rapped along with "Yo! MTV Raps" on televison. Now, the youth centre crowds rapped along with his rhymes.

Around the turn of the millennium, Toni L, an already established rapper, became aware of the up-and-coming MC in Bühl. He took him to the Piemont Studios in Heidelberg. There, the young man from Offenburg met Boulevard Bou who helped him to hone his beats and rhymes. In 2001, P-Vers even made it to the splash! festival with the Heidelberg rappers. To an audience of 20,000, he performed the song "Titelkampf" with Toni L, Torch and Boulevard Bou. "This was a highlight of my career", P-Vers says, making air quotes around the word 'career'.

Rap is my valve. Passion, not profession
"What will become of my rap, will it ever feed me?", asked P-Vers in one of his songs in 2011. He always knew that the chances for this were slim: "I come from a very down-to-earth and conservative family," he says. "Making a living from rap is very hard in Germany." Disappointed? Certainly not! Patrick loves his job at HOBART. "Rap is my passion," P-Vers says. And for him, a very quiet and observing child, it had always been a way of venting his feelings. "Soccer plays a similar role for me," he says and laughs. All his life, soccer and rap used to be the two fixed points during his childhood in Uffhofen and Stegermatt and now as a soon-to-be dad in Oststadt, where Patrick and his girlfriend are living these days.

Rapper with employed work
After his time with the Heidelberg  rappers, P-Vers turned to Streethop Records: Since the mid-2000s, he has been producing songs, albums and videos with Claudio Esposito, Maximum One and the crew, often featuring top-level guest stars. On YouTube, the Offenburg song "Wo ich herkomm" (engl. "Where I come from") has triple the number of clicks Offenburg has inhabitants. In the beginning, his friends asked P-Vers how he was able to juggle rap and a fulltime job. "I told them: I am like B-Rabbit in 8 Mile. Every now and then, I can briefly follow my own thoughts while I'm working."

Yo P, it’s on you, what you wanna do?
Patrick does not reply to the question in the same words as Mobb Deep ("Whatever, party’s over, tell the rest of the crew"). On the contrary: "I am still as active as 20 years ago," he says
and dismisses the impression that he was a rapper in retirement. "I am a bit like an eccentric professor. For two or three years, very quietly and all by myself, I am working on something new." What can we expect to come next? "Well an album, what else?", and a lot of videos. As always, funk and soul will play a major role. And "there will be a whole lot of hip-hop culture."