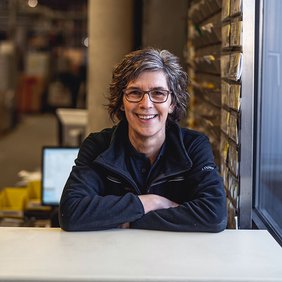 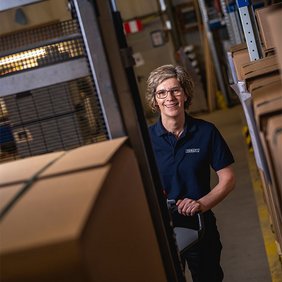 Six years ago, the headline would have been something like "Optician assembles the new AUP-10A". Daniele Junker is someone who has made a lateral career move. Nevertheless – or perhaps because of this – she has material planning at HOBART under control. If there is one thing you need when making a career change at 43, it's courage. And Daniele Junker is very courageous. Six years ago, the trained optician made a career change, trading her opticians' tools for a wrench, and is now wearing a boiler suit instead of a blazer. For her, the decision was not a difficult one. She was on the lookout for something new, and felt at home at HOBART, right from the beginning.

"I've always enjoyed working with my hands," says Junker. "As an optician, the processes simply involved smaller parts, but the basic principle was the same. And of course it is all twice as much fun working in a team – it's like a large family." She came up with the idea of working at HOBART from her husband. He works there himself, and encouraged her to apply. The then 43-year-old started off with smaller assembly jobs. Then following a brief training phase, she was also working on larger machines. Her favourite piece is the AUP-10 hood-type dishwasher. "There's just more to it than with the standard models," she says and laughs. Today, Junker is 49 and works mainly in material planning, compares stock levels and consumption, monitors orders and organises their storage. It wasn't a planned change, but rather, just happened – assisting became a full-time job. But she enjoys this as well. "Of course, estimating material consumption is sometimes tricky," says Junker. "Depending on production, there are occasionally fluctuations. The challenge here is to make sure that the right amount of materials is always available despite that."

She balances her work at HOBART through her volunteer work with the fire brigade. She has been with them for over 30 years as a flautist in the marching band. However, since very recently she is no longer active she says. That being said, the group is her second family. "Even if I'm not actively playing flute anymore," she says, "I'm still at every performance – helping out." This is because she is an expert at organising – both at work and in her private life. Nevertheless, she tries her best to separate her work and her private life. This doesn't always work straightaway. But after a cup of coffee with her friends, a walk in the fresh air, a few pages of an interesting book or a long walk in the mountains, she feels like she can breathe again, ready for new ideas and projects.

When it comes to the future, Daniele is not too concerned. Change comes regardless, and once she finally reaches that bridge, she'll take on the new challenges, familiarise herself with unknown topics, and find creative solutions. A bit like the award-winning chef Katharina Schweizer, a character from Brigitte Glaser's Baden crime novel "Kirschtote" – one of her favourite books. One thing is for certain – the 49-year-old found her career destination six years ago. She is happy at HOBART, and with this in mind, come what may. Daniele Junker is prepared.